The controversy over differing nutritional theories arises more from semantics and the limitation of language than it does from scientific principles.

These may sound like sharp words that admittedly could almost seem elitist, so let me try to explain…

The argument that a ‘calorie is not a calorie’, or that ‘not all calories are created equal’ is an error in language. Either that or an illustration of a gross lack of understanding. 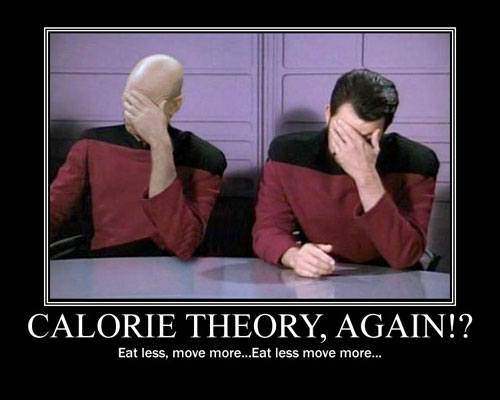 What is typically meant when someone says “not all calories are equal” is “not all macro-nutrients are equal” which is a valid statement.

The problem arises again in language… someone is thinking “Not all macro-nutrients are equal”(which is true)  but says “Not all calories are equal” (which is not true)…and you can see where the confusion arises.

Entire online debates rage on because each side is arguing a one-sided argument… A calorie is a calorie (true) and no all macro-nutrients are the same (also true).

The language confuses people..and since both sides are technically right, the only logical conclusion is that the people arguing the other side are simply crazy, or jaded, or delusional.

This is similar to me arguing that car tires are round, and you vehemently denying that they are round, because they are made or rubber. We can argue all day, but we’re not going to get anywhere until we realize we’re both right, and we’re talking about to different properties of the tire (its shape and what it’s made of)

The other issue with nutrition is one of critical thinking… of trying to figure out what is, and is not an absolute.

We tend to mistake our assumptions for absolutes. This leads to faulty logic…or even extremely sound logic just based on incorrect assumptions.

We all make hundreds of assumptions every day without thinking about it. Many assumptions are sound and justifiable. Many, however, are not.

Daily assumptions are necessary to simply navigate the world. For example, you only feel safe driving through a green light assuming that the cars waiting at the red light are in fact going to wait and not just charge headlong through the intersection on a red. (Accidents happen when our assumptions are incorrect)

In research Assumptions are the things we take for granted in the study: statements by the researcher that certain elements of the research are understood to be true.

Here are some examples.

The Atwater factors…you know, our estimated (and rounded) amount of calories per gram of Protein, Carbs and Fats (4,4,9 respectively) These are in fact estimates.

They were set more than 100 years ago, and are estimates based on the average of a large number of foods, then rounding those numbers so they’re nice and even.

But if we assume the Atwater factors as absolutes it can skew the rest of our logic.

As an example, protein at 4 Calories per gram is an extremely rough estimate…and at times the measured number can be closer to and even at extreme times, below 3 Calories per gram, Depending on the amino acid make up of said protein.

Why does this matter? Because if we assume that calories at 4 are an absolute, but then see weight loss  or weight gain that is unaccounted for in our math…we are left with no choice but to theorize at other possible reasons for the additional weight loss.

The other problem with the Atwater factors is the secondary assumption..that all of the energy that is estimated to be contained in the food makes it into our blood stream and thus incorporated into the systems of our body. In other words, not just into our mouths or gut, but actually into our bodies.

This is also an incorrect assumption as shown by the recent research on Almonds.  But if you ignore the concept of ‘metabolizable energy’ (the energy that is actually available to your body) then you must come up with other possible explanations for the discrepancy…

Another example is the suggestion that ‘obese people eat the same amount of calories as non-obese people’. This was once proven in research, then later invalidated in follow up research. But, if you are unaware of the invalidation that occurred (or just choosing to ignore it), then what are you left with? If you assume that a greater calorie intake is not associated with obesity under this assumption you have no choice but to theorize at other possible reasons for weight gain other than an excess calorie intake over calorie needs.

In both of these examples we let assumptions override our logic or critical thinking.

In this case the assumptions were that A) the elevated metabolic rate of the subjects was normal  (even though it was as high as 2,700) and that B) the predictive calculations were correct.

So what can you do?

Identify and challenge your assumptions, and be aware of the assumptions of others.

In the middle ages the implicit belief was that the Earth was at center of the universe.

The atom was originally defined as the smallest indivisible unit of matter. The assumption was that an atom could never be subdivided. This belief hampered the advancement of science until eventually J.J. Thomson discovered the existence of a sub-atomic particle, the electron, in 1887.

So things that we are absolutely positively 100% sure are right… sometimes aren’t.

There’s nothing wrong with assumptions, they’re a central part of how we function as a species. We automatically make inferences from our assumptions to gain a basis for understanding and action. We do this so quickly and automatically that we’re often unaware of their origin. We see dark clouds and think rain. We see a fit on-line guru with a 6-pack and infer that their diet or exercise program is what made them lean.

The problem arises not from assumptions but from not being aware of our assumptions. We need to realize that the inferences we make are heavily influenced by our point of view and the assumptions we have made about people and situations.

Here are some tips:

We need to take command of our thinking, not let others do it for us.

Case in point – We have lots of reproducible evidence that the bodybuilding lifestyle gets people lean and muscular looking. If followed successfully, most people can get ready and look great for a fitness/bodybuilding contest. They may not win, but they will look great.

The hard part is teasing out which parts of the bodybuilding lifestyle is responsible for this effect, and which are not.

This is where our inferences are skewed by our assumptions and our point of view. So we need to be careful.

Look at all the available information and evidence. World wide.

Have there ever been people who became exceptionally lean while still eating carbohydrates? Have there been a group of people to build impressive amounts of muscle without eating copious amounts of protein? Have we seen young and old, men and women get in shape? These are the type of questions we need to ask to challenge our assumptions.

My favorite assumption right now is that male gymnasts get their amazing physiques from doing gymnastics. You see this used as evidence for body weight training right now.

The assumptions are that:

B) That they ONLY do gymnastics (no weight training)

C) That the body weight exercises available to the average man or women are similar to those that the gymnasts uses.

D) That the time allotment (gymnasts start as early as 4 or 5 years old and are specialized by 8 or 9) is not relevant, we can ‘catch up’.

E) That an hour of training 4 or 5 times a week is similar to the 3 to 4 hours 5 days a week most young gymnasts endure.

Now, I’m not suggesting that all of these assumptions are wrong, but they are things we need to constantly challenge in order to make the best use of our time in the pursuit of having a lean fit body.

The best way to simplify your approach to getting the body you want, and to avoid or identify the roadblocks (brakes) keeping you from your goal is to constantly challenge your assumptions.

It’s also what will keep you from falling victim to the relentless and never ending parade of fitness and nutrition scams that arrive in your in-box every morning.

What are the assumptions made in these commonly used Fitness Memes? 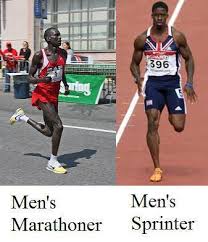 *These are different men

*Men are the same age

*The sprinter is the desired look for everyone

*Nothing else is at play (Nutrition, weight training, drugs, genetics)

*The marathoner doesn’t sprint and the sprinter doesn’t marathon

*These are different women

*they are the same age

*They are the same nationality

*Woman on left does not

*There are no other factors at play

*Squatting has something to do with her leanness and beauty

*If she did not squat (assuming she does) then she would not look like this.